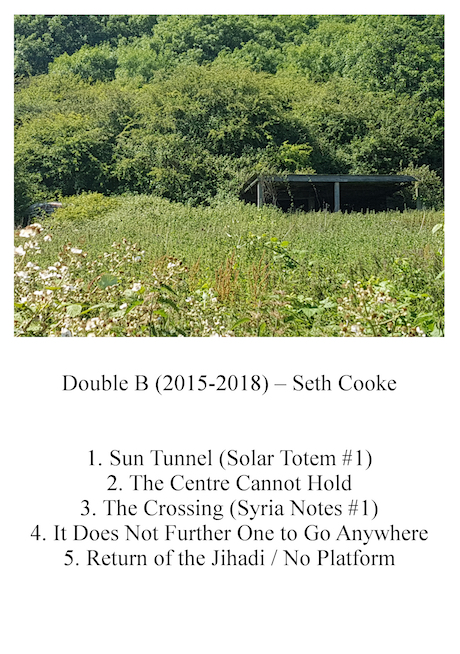 Following up on his remarkable TRIANGULAR TRADE, sound artist (and operator of the Every Contact Leaves a Trace imprint) Seth Cooke offers with Double B another richly investigated, purposeful work looking into the sonic artifacts of the unresolved dissonances in constellations of history, politics, and media. Through his no-input field recording technique, Cooke brings into consideration the materiality of the inscription devices, a sort of sonic ghost hunting that rewards investigative listening. Like the work of Akomfrah or Sebald, Double B traces a path through seemingly disparate places, times, and ways of listening.

“Piling the earth until the central beam cracked, as though the whole government, the whole country were cracking. Really, we had a revolution then. lt was the end of one society and the beginning of the next.”

“The event must occur on Friday, May 4, for my purposes, because I plan to invite a number of guest speakers – including Richard Spencer of the National Policy institute and Michael Peinovich of The Right Stuff – to speak to attendees of my event about the unfortunate modern trend of violent left-wing Antifa protestors trying to undermine the free speech rights of right-wing people, and this date is the 48th anniversary of the Kent State shootings by the Ohio National Guard – which will be a very prominent theme of the discussion.”


Jo Cox was shot and stabbed on 16th June 2016, a week later we cracked apart along every fault. An attic hideout, a project space, a woodshed, a field in England.

“If you keep harassing people like Jacob Rees-Mogg then you will get the Britain First cannons turned on you… stay the hell away from politicians on the right of politics. If you carry on then you are going to find Britain First and our activists on your doorstep.”


Darren Osborne intended to kill Jeremy Corbyn and Sadiq Khan. In court he claimed his fictitious friend ‘Dave’ drove the hire van into the worshippers outside the Finsbury Park Mosque, another absent agitator.

“He's like Dynamo, an illusion. An illusionist. He can make himself vanish perhaps, I don't know.”


Double B is five tracks of one-take pseudo-performative no-input field recording/field recording, upon which compression was piled until the structure broke under the weight. Imprints, feedback, pitfalls and backmasking layered later.

In an edition of 40 with original photographs and text by Cooke.


digital at our Bandcamp.