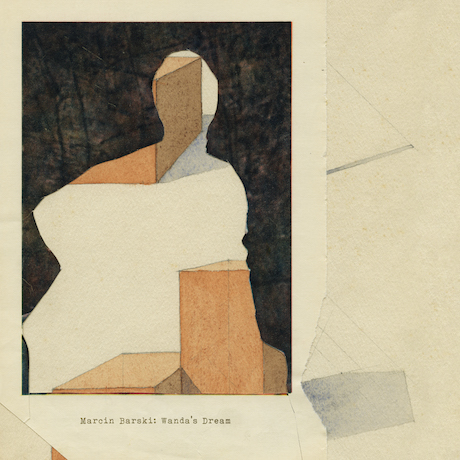 We are thrilled to present Wanda's Dream, the new work by Krakow-based sound artist and researcher Marcin Barski. Below is Barski's introduction to the record.


The 1980s were special. It was then when microphones became a natural common part of the equipment of many households. Audio recordings were no longer unusual: everyone could make them. Handheld walkmans with a dictaphone option, analogue answering machines, tape players always equipped with a red button and a tiny hole to which one should speak in order to have their voice archived – all of these were to be found pretty much everywhere and pretty much everyone knew how to use them. There was no philosophy behind it: tapes cost pennies. And many of them have survived to this day. (...)

Disappointment is a recurrent theme in these tapes. The jammed Radio Free Europe broadcasts, the vulgar sexist cabarets which stopped being funny many, many years ago (if they were ever funny at all) and above all the conversations describing new taxes, the difficulties of everyday life, or even complaints about the phoning system and the need to wait hours by the phone before being able to speak to relatives abroad.

It is not uncommon to find tapes with Father Popieluszko’s sermons about truth, disguised (perhaps to fool the militia?) as Modern Talking cassettes, with the tracklist handwritten on the red and white inlay card. In the illegal underground circuit of the 1980s, the visual could function just as a cover-up for the audial. The Polish soundscape back then was very much happening on the level of the imagination. On tapes, people were sharing things they had never seen, the voices of people they had never met and recordings of music they could never experience live in a concert. The audial was shaping their longing for the visual. The audial had the power of changing a reality which otherwise was too much stuck in its greyness. (...)

The other day, I found a box of tapes with recordings of phone conversations from 1982-1984. The man who was recording them – Jan – documented every single talk he had over the phone throughout these years. His wife lived in Vienna at that time and was sending him Western goods that he distributed in Warsaw among friends. But he was also a romantic guy: the tape on the bottom of the box was titled (in handwriting in pencil) «Wanda’s Dream, May 1982». It’s a quiet, 8-minute long recording of someone’s snoring. Did Jan ever listen back to his wife sleeping? Did he go to sleep in a grey communist Warsaw flat with this tape on after both TV channels had finished their broadcasts? Did he ever try to imagine the sounds, the smells and the looks of Wanda’s bedroom in colorful capitalist Vienna? Again, disappointment is a recurring theme. In a way, Jan lived a polygamic life, with one wife behind many passport controls and another one on his tapes. Both invisible, but which one was more real?

Excerpt from "Sermons over Modern Talking" essay published in "Topos. Journal for philosophy and cultural studies" (No 1 2018). The whole text in pdf format available here.