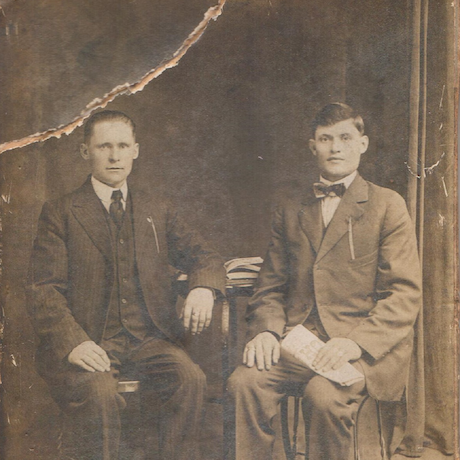 Riasni Drova was the foundational Ukrainian experimental underground duo of musicians Andrij Orel and Oleg Vorobyov. I met Andrij while on tour in Ukraine in the summer of 2017. I knew a bit about his music and had reached out randomly to see if he'd want to get a coffee while I was in Lviv, where he was living with his family. We ended up walking and talking all day, and he came to Kyiv a few days later to hang at a festival I was playing put on by the folks in noise group WBBB. Andrij and the WBBB crew schooled me on the history of the Ukrainian underground, politics, music scenes, everything. At the beginning of Russia's 2022 assault on Ukraine, Andrij and I decided to re-release this under-appreciated album in order to raise funds for civilian support in Ukraine. 100% of proceeds will go (in perpetuity) directly to Mariupol-based leftist artist collective Freefilmers, who are supporting civilian relocation since the outbreak of Russia's attack on Ukraine.

Early in the summer after the attack began, I was heartbroken to learn from friends in Ukraine that Oleg had been killed by Russian troops. I had never met Oleg in person but had been listening to his music with Andrij for years, which has had a deep influence on me and this label. We send our love to his friends and family, and we hope folks enjoy this music. There's a bunch of other Riasni Drova music out there if you want to seek it out. It's thoughtful, deep, at times humorous, and very honest music.

Digital only. Order from bandcamp.